High resolution and very accurate 3d model created according to real reference. Native format is Cinema 4d, model can use Hypernurbs subdivision. Other formats are exported in one resolution. This can be further subdivided. Exported formats 3ds, max, fbx and obj are prepared well to work correctly with every standard modeling software such as Maya, Lightwave etc... Using FBX file for import is strongly recommended, because it preserves basic material properties, objects hierarchy, uvw coordinates and quad geometry. 3ds format preserves basic material properties, hierarchy and uvw coordinates, but all geometry is triangular. Max format includes hierarchy, quad geometry, Turbosmooth and standard materials. OBJ format preserves only quad geometry and uvw coordinates. Each format of model (except for OBJ) has hierarchy of parents and children objects ready to animate manually or using any car animation plugin. All mesh parts separated by material are jointed under one empty (no polygons) object used as their pivot. All materials, textures and objects are sorted well to make Your own materials for special render engines.

Textures are included with all files, main texture's size is 3072x3072 pixels split onto these channels - xxx_tex.jpg (diffuse color), xxx_bum.jpg (bump), xxx_spe.jpg (specular color and intensity), xxx_ref.jpg (reflectance intensity), xxx_lum.jpg (luminance color). C4D version comes with standard and Vray materials. Vray engine doesn't support motion blur of other than keyframed motion. Previews were rendered using Cinema 4d 11.5 Model scale is unit millimeters. Environment scene where the car is placed is not included!
This model was created, saved and exported from Cinema 4d 11.5. Compatibility level with other versions may be restricted due to changes in versions of software, because some features, shaders etc may be renamed or removed from Cinema 4D versions above 11.5.

The third generation of the Lexus IS was introduced in Germany on June 29, 2013, after the vehicle was launched in other parts of the world shortly before. In Europe, the model is offered only with rear-wheel drive. In contrast, in the US also a four-wheel drive is available in addition to the rear-wheel drive for the variants IS250 and IS350.

For the first time in addition to the well-known from the previous model V6 gasoline engines in the mid-size sedan on a four-cylinder gasoline engine based hybrid drive offered. Another gasoline variant came in October 2015 on the market. It is the IS 200t, which offers 180 KW of power and is offered with a new 8-speed automatic transmission. 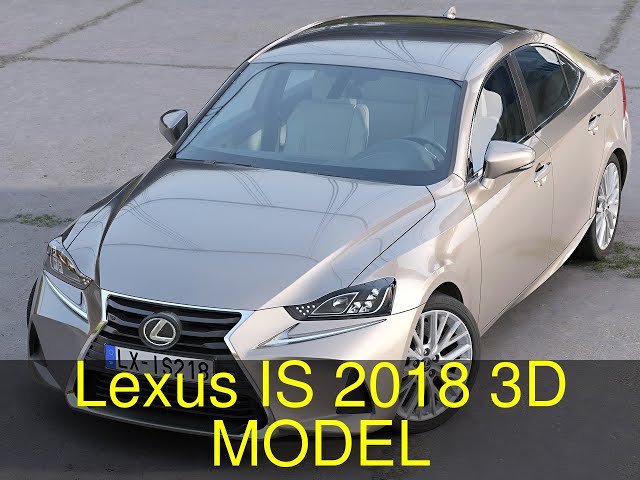