The Pont Neuf is the oldest standing bridge across the river Seine in Paris, France. It stands by the western point of the Île de la Cité, the island in the middle of the river that was, between 250 and 225 BC, the birthplace of Paris, then known as Lutetia, and during the medieval period, the heart of the city.

In the middle of the XVI century in Paris, there were only four bridges: Small Bridge, Notre Dame Bridge, Saint-Michel Bridge, and the Changed Bridge. Since Paris at that time was already a fairly large city with heavy traffic, which caused significant damage to existing bridges, it was urgently required to build a new bridge that would connect the Louvre with the market of Saint Germain des Prés Abbey.

Already in 1556, King Henry II planned to build a bridge but failed, faced with the resistance of Parisian merchants. Only 20 years later, on the evening of May 31, 1578, King Henry III laid the foundation for the construction of the bridge. A distinctive feature of the New Bridge was that it was not built up with shops and houses, like other bridges. Thus, passing over the bridge, one could admire the Seine and the surroundings, but the merchants were unhappy with how much space was left unused. It was distinguished by the New Bridge and the extraordinary width for the 16th century — 20 m — exceeding the width not only of all Paris bridges but also of most of the city’s streets [1]. The construction of the bridge was led by Guillaume Marchand, who took the project of Batista Androuet du Sersault (Fr.) Rus. As the basis. The bridge was handed over only in 1606, already under King Henry IV. Shortly after the passing of the bridge, shops and booths, common to all Parisian bridges, appeared on it, which were demolished only in the first half of the 19th century.

In 1614, by order of Queen Marie de Medici, in the middle part of the bridge, which rests on the island of Cité, a statue of a horseman was erected in honor of her dead husband, King Henry IV. It was the first monument to the French king, installed in a public place. The design of the statue was also innovative for its time: the statue was not framed by buildings, as was customary before, but placed in an open place. The bronze statue of the king remained in this place until the French Revolution - in 1792 it was smashed and thrown into the Seine. Several fragments of the monument that is now on display at the Carnival Museum have survived. In 1814, King Louis XVIII ordered to cast a new statue and install it in the same place as the New Bridge. It is this statue that we see today.

An accurate high-quality model of the Pont Neuf Bridge across the Seine in Paris. While the dimensions of this model are close to the original, the modular structure means it can be tiled to span a crossing as wide as you need. Ideal for animation, previz, or games. Just 3 textures used, all in power of two. Water included in Max version only. 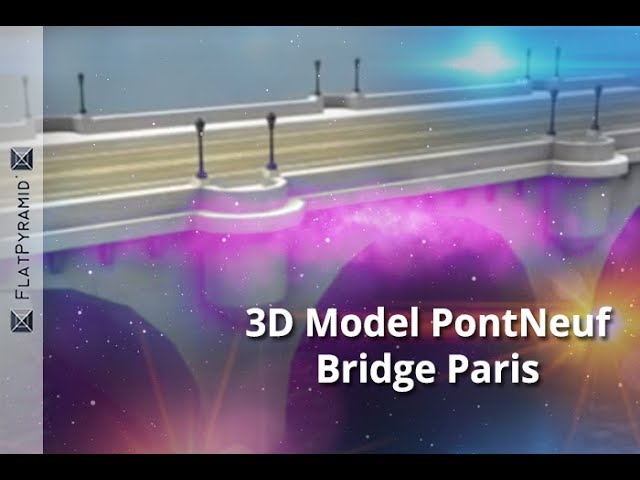