The Volkswagen Polo is a car produced by the German manufacturer Volkswagen since 1975. It is sold in Europe and other markets worldwide in hatchback, sedan and estate variants. The Polo has been produced in six generations. Related Volkswagen Group models include the Skoda Fabia, SEAT Ibiza and Audi A1. The Volkswagen Polo won the World Car of The Year Award in 2010.

As of 2018, there has been six different separate generations of the Polo , usually identified by a “Series” or “Mark” number.

Volkswagen launched the fifth generation Polo at the Geneva Motor Show in March 2009. For the first time in Polo’s history, the car was declared European Car of The Year, for 2010. The Polo was also declared 2010 World Car of the Year at the New York international Auto Show in April 2010.

It shares its platform with the 2008 SEAT Ibiza MK4, and the Audi A1. Production for the United Kingdom market started in August 2009, with first deliveries beginning in October 2009. Official images released show the new Polo follows styling cues from the Golf VI.

At FlatPyramid, we have developed a strikingly beautiful 3-D model of the Volkswagen Polo. It is available in different formats for commercial, non-commercial and editorial purposes. The design can be used in any project. It is one of the most detailed models of the Volkswagen Polo that you will come across on the web. In case of any query, please feel free to contact. We will assist you with all your concerns and questions.

Thank you for showing interest in buying 3-D model of the Volkswagen Polo. 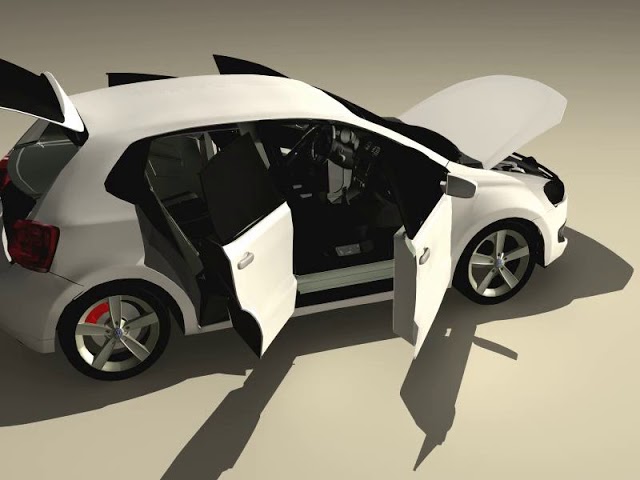